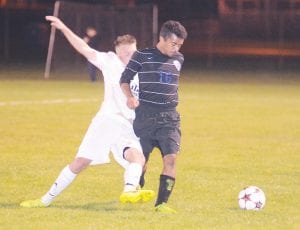 Jawanza Edwards takes possession of the ball at Grand Blanc on Monday.

GRAND BLANC — After losing to Clarkston 6-0 in the first round of Davison district No. 15-1 last year, the Carman- Ainsworth varsity soccer team was looking for a better outcome during the 2014 postseason.

Luck wasn’t on the Cavaliers side, though, because they drew a first-round matchup in Lapeer district No. 15-1 against Kensington Lakes Activities Association- West powerhouse Grand Blanc on Monday, losing 2-0.

“I came and videotaped (Grand Blanc) and watched them. I knew that they’d dump the ball into the box a lot and I knew we had to prepare for that,” said Carman- Ainsworth coach Jay Witham. “What we were going to try and do is put three guys up top and go over the top on those guys and catch them on their heels because I knew they could knock the ball around on us in the center-mid often against us.”

In a contest that saw all of the offense take place in the first half, Cavs’ goalie Tyler Springer made 18 saves on the night. Elsewhere in the district, Grand Blanc moved on to a district semifinals matchup yesterday at Lapeer, which beat Swartz Creek 3-1 on Monday in its first-round game.

“We got caught on some goals, so we went back to our 4-4-2 (formation), we settled in and we made a game of it,” Witham said. “I was proud of my guys, that’s for sure. They didn’t quit. We kind of man-marked their forwards. Our outside defenders did a great job of locking up their guys. We just tried to get it to our center midfielders and get it over the top and they settled for some outside shots.”

Oxford also beat Flushing 2-0 in opening round action of this district on Monday and advanced to a semifinals contest yesterday at Lapeer against Davison. The Cardinals drew a bye for the initial round of the playoffs.

“This has been one of our better seasons in four or five years. We had a couple goals, including finishing over .500, and we accomplished that,” said Witham. “We also won our (Saginaw Valley League) tournament and we wanted to compete in every game, and we did that. I’ve had a bunch of these guys for three years now. I have some veterans plus some younger guys that filled in. We knew we had something special going this year.”

For the year, Carman-Ainsworth finished with a record of 10-9-2. Coming into this contest, Witham said he though the Bobcats were the team to beat in this district and some of the individual players he thought could be key for his team included Ahmad Alzahabi, Derrald Boggan, Uthman Shukairy, Kyce Zaiter, Jason Haynes and Jawanza Edwards.

“I’m definitely proud of these guys. They’re tough,” Witham said. “For Grand Blanc, a lot of these guys play travel ball and have been playing since they were little. I’ve got guys that maybe have only been playing two years. For us to come out and compete against them, that shows a lot of character on our part. (We) put all out on the field and left it out there. (We) played hard from the start and came in focused.”