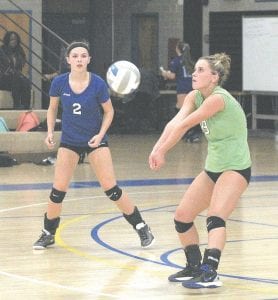 Carman-Ainsworth’s Morgan Sherrer bumps the ball, as Hannah Thurston (2) anticipates the next play on September 12.

FLUSHING – The season came to a close for the Carman-Ainsworth volleyball team, as the Cavaliers lost to Linden 18-25, 22-25, 19-25 in the district quarterfinal on Monday night.

“After losing game one, we came out strong, having a 20-9, 21-14, and 22-15 lead in game two with lots of momentum on our side,” said Cavaliers’ coach Barb Hurand. “Linden served and hit tough to shock us with a huge comeback to steal game two 25-22. We never gave up and continued to try to force a game four. Linden played a tough and solid match. They attacked our open spots, served tough, and earned their trip to the District Semis. They’re well coached. We can pick ourselves apart on the should-havebeens or could-have-beens, but we won’t do that. We fought hard and it was a great match.”

On Saturday, the Cavs went 3-3 in the Saginaw Valley Conference League Tournament. Carman- Ainsworth finished tied with Midland Dow for seventh place in the 14-team conference.

“We went there to win it knowing we had to face some strong league teams in pool to get to the championship rounds,” said Hurand. “We fell short losing to Lapeer, Midland and Mt. Pleasant. We worked really hard in those matches, never gave up, and we played pretty competitively.”

Over the course of the tournament, Morgan Sherrer had 53 digs, 18 kills and seven aces. Speaks led the Cavs in digs with 55. Amaya Campbell filled up the stat sheet with 19 kills, 16 digs, seven aces and six blocks. Lester posted 32 digs and 23 kills. Harmon had 33 assists, 21 digs and five blocks. Dollinger led the team in assists with 40. Johnson added 13 kills and five blocks. Hannah Thurston had 10 aces on the day.

Carman-Ainsworth finished the season 13-25-5 overall and 6-9 in league play.