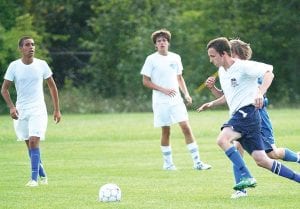 Carman-Ainsworth traveled to Kearsley on Tuesday afternoon for a friendly scrimmage.

FLINT TOWNSHIP —
The Carman- Ainsworth Cavaliers need to draw on teamwork this season if they want to equal last season’s 14-5-2 record and return to the second round of the playoffs, where they lost to a tough Grand Blanc team.

Fourth-year coach Jay Witham is looking for help from a strong junior varsity squad to compete this season, but expects that to replace the 17 seniors who were lost to graduation. Those shoes Witham expects will be filled by committee. The Cavaliers have a lot of building to do as among the 17 graduated was standout player Ezekiel Harris, who is now playing Div. 1 soccer at the University of Michigan.

The Cavs will be returning five players up the middle, including four-year varsity player Kyle Gomez, who was All-League and All-District center midfielder last season. The team also will count on three-year midfielder Todd Brokowski, who will move from one of the center midfield spots to central defender to help bolster a young defense, their top returning scorer will be Caleb Harrison, who had five goals last season. They also will look to Brandon Skwirsk to help toughen the middle of the field for them as well as Cameron Marsh, who will see time at both an outside midfield position as well as up front as a forward.

“We will be strong in the center of the field,” Witham said “This season will depend on whether or not we can solidify our defense and if the rotation of our outside midfielders works.”

Carman, which plays in the tough Big Nine conference, has set a goal of winning the league and is working hard to make sure it attains that goal. And if Carman-Ainsworth does win the league, it could have a lot to do with its tough non-conference schedule that includes Troy Athens, Detroit Country Day, Goodrich, Utica Eisenhower and Saginaw Heritage.

“We hope to compete for the Big Nine championship every year,” Witham said “This year we are a well-rounded team and in the past it has always seemed that we are right in the hunt for the league championship. Hopefully this is the year we can get over the hump.”