Carman-Ainsworth falls to Davison in soccer 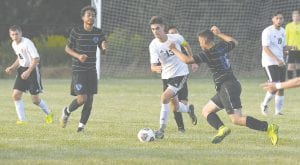 Carman-Ainsworth’s Ryan Farrar (7) and Mohamed Farhan (16) close in on a Flushing opponent on Aug. 24.

FLINT TWP. – The Cavaliers’ boys’ soccer team was shut out 3-0 by Davison on Monday.

Davison jumped out to a 1-0 lead in the sixth minute and added an insurance goal in the 12th minute. Davison then added the final goal with about 10 minutes left of the game.

Carman-Ainsworth hosted the CAV Classic on Saturday, beating Birch Run in the opening game, but lost to the would-be champions, Lake Fenton, in its second game. Carman-Ainsworth topped Birch Run, winning 2-1. Birch Run got on the board first, tallying the only goal of the first half. In the second half, Zain Shukairy found the net twice with helpers from Ryan Farrar. Goalie Darwin Bostwick had four saves. Carman- Ainsworth lost 2-0 to Lake Fenton.

The Cavaliers got their third win of the season last Wednesday, defeating Mt. Pleasant 4-1. Shukairy had a pair of goals in the first half with assists from Tommy Taylor and Farrar. Wallace Hill also found the net on a penalty kick. In the second half, Taylor scored with an assist from Bostwick. Mt. Pleasant’s lone goal came in the second half. Bostwick had two saves in net.