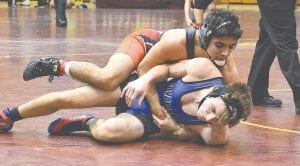 The Cavs’ Nathan Peterson, bottom, tries to avoid being pinned in the Genesee County Meet on Saturday at Davison High.

DAVISON – The Carman-Ainsworth wrestling team had two wrestlers finish in the top six in their respective weight classes at the Genesee County Meet at Davison High School on Saturday. Nathan Peterson was fourth overall at 130 lbs., and Dominique Horton was sixth place at 160 lbs.

Peterson was pinned by Davison’s James Johnson in the 130 third-place match. Horton lost a 12-6 decision in the fifth-place match to Linden’s Uzziah Delgado, after defeating Linden’s Mitchell Kerr with a pin at 4:00 in the preliminary round.

The Cavs’ Dejon Hoyle also was pinned in the 135 quarterfinals by Davison’s Augustine Facundo at 2:22.

Nathan Delong at 152 lbs. went 1-2 with a win over Swartz Creek’s Brennon Larion in an 8-1 decision.