Carman-Ainsworth/Flushing hockey under new leadership in 2010-11 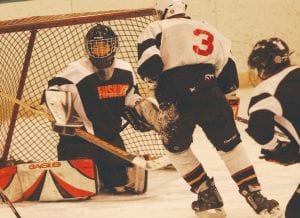 Flushing’s players went through early season practice during the first official week of practice. The season starts Nov. 20 against Lapeer West at the Polar Palace in Lapeer.

FLINT TWP.
–- Those familiar with the co-op Carman-Ainsworth/Flushing high school hockey team will see more than the usual number of new faces this season, as first-year coach Jon Jepson takes over from Paul Starvato.

Jepson says that junior goalie Casey Bradshaw of Flushing will be key for the squad this season. He also has lined up his senior leadership corps of Blake Scharsnitz, Matt Leland, Josh Williams and Tony Reisert. Underclassman Jordy Makrani at forward is being touted as another player who could make a difference for the Raiders.

“I’m looking forward to seeing some good things on offense from him,” Jepson noted.

This year’s squad has 17 from Flushing and Carman-Ainsworth players include junior forward Matt Nagy, junior forward Ken Rutherford and the Yencer brothers. Jacob is a junior goalie and Nick is a freshman forward.

The Raiders went 9-13 last season, and lost, 6-2, to Bay City in the pre-district round of play, but Jepson believes this team could go further.

“We have a good group of kids out who will be a good blue-collar team,” Jepson explained. “We hope to at least outwork everyone and every game will be a tough game. With me being new, we’ll find out what the competition looks like and how we match up against them.”

That competition includes last year’s No. 5 Div. 1-ranked Davison squad that graduated ten seniors, including scoring leaders Travis Carto and Dylan Welch. Jepson noted that his squad also plays a lot of the Metro teams, and they, too, have new coaches and the return of scoring leaders from two seasons ago, who have been playing travel hockey. Goodrich also has a new coach this season among Genesee Area Conference squads, and time will tell how big a toll graduation took on Durand-Lake Fenton and Flint Powers Catholic.

With just the second official week of practice underway, positions are still being contested among some of the players, but Jepson sees nothing but a good, hard-working team anxious to get the season underway. That happens Saturday, Nov. 20 when the Raiders take on Lapeer West at West.