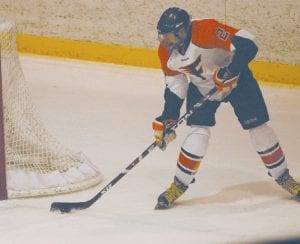 LUDINGTON— Travel can often deter from a team’s performance, however, that was not the case this weekend, as the Carman- Ainsworth/Flushing co-op hockey team took first place at the Ludington Invite on Friday and Saturday.

The Raiders opened the tournament with a 9-1 win over the Unity Knights, forcing the mercy rule to come into play after two periods. Matt Nagy recorded a hat trick in the contest, while Andrew Sanborn lit the lamp twice and assisted on another. Jordy Makranyi also had a pair of tallies and an assist, as Hunter Miller and Dan Olson each picked up a goal and a helper. Casey Bradshaw picked up the win between the pipes for the Raiders.

In the championship game, the Raiders would head into a rematch of last year’s final against the Manistee Chippewas, in which Manistee took a 4-2 win to clinch its fifth consecutive tournament title. Makranyi rippled the mesh first, scoring on an assist from Mickey Montpas. Two second period goals put the Raiders in a hole, but not for long. Flushing responded when Gavin Williams picked up his first high school tally, followed by a Sanborn goal.

Montpas and Makranyi put the final nail in the coffin, as both scored in the third period to ice the win, 5-2. Chad Bundy picked up the win in net, as well as All-Tournament team honors along with Nagy and Garrett Schafsnitz.

“It was a great win for the Flushing hockey program,” said Flushing coach John Jepson. “The boys played very well as a team. We have a great group of boys and it was really nice to see them rewarded for their hard work.”

Prior to the tournament, the Raiders traveled to Milford on Wednesday, falling, 9-5. Milford took the early advantage with a 4-1 lead at the end of the first period. Montpas scored the lone Raiders’ goal in the opening frame. Nagy would tally in the second period, however, the deficit was even deeper after two periods, 7-2. Montpas, Sanborn and Nick Brazeal scored in the third to cut the lead to 7-5. It would not be enough, as Milford scored twice more to seal the victory.

“(Milford) was a very good team and we came out very disorganized and not ready, and a good team like that makes you pay for that and they did,” continued Jepson. “I was proud with the fact that our boys did not quit and kept fighting back.” The Raiders return to the ice on Saturday against Haslett.