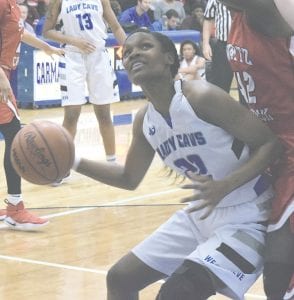 Carman-Ainsworth’s Bless Calhoun backs up her defender to get a shot off against Swartz Creek on Dec. 1.

YPSILANTI – The Lady Cavs improved to 6-0 on the season after defeating Ypsilanti Arbor Prep in overtime on Saturday, 63-59. Arbor Prep jumped out to an early lead, giving Carman-Ainsworth the difficult task of completing a come-from-behind win.

Arbor Prep put up a pair of 19-point quarters to open the game, while holding Carman-Ainsworth to 11 and 20 for a 38-31 lead at halftime. Carman- Ainsworth fought back though, putting up a pair of 12-point quarters in the second half while holding Arbor Prep to eight and nine to tie the game at 55. The Cavaliers then went on an 8-4 run in overtime to complete the comeback.

Destiny Strother set the pace for the Lady Cavs with 19 points. Chenelle King chipped in 15 points. Jessiana Aaron had 11 points, including five in overtime to help the win. Xeryia Tartt added nine points and snagged 10 rebounds.

Carman-Ainsworth will be at the Motor City Roundball Classic at Detroit Northwestern on Wednesday.