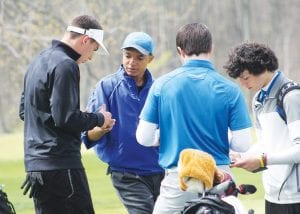 Alex Frank, Garrett Wilson and Kyle Fluker are seniors in the fiveman lineup entered in the field. Junior Haywood Petty and Noah Vanderhyde are the other Cavaliers scheduled to play.

Frank and Fluker played in last year’s district but finished well out of qualifying range for the regional. The top six teams and top six individuals not on those teams will move on to the regional May 29 at Davison Country Club.

Petty will be playing in his third straight district. He has been the Cavs’ low scorer the past two years, including a 92 in last year’s district. That was still seven strokes off the final qualifying berth, and coach Bob Blaylock is just looking for a good final showing by his Cavaliers.

“I’m hoping this will be a fun day for the team and that they play well,” he said.