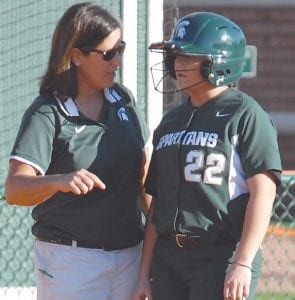 MSU softball coach and Carman-Ainsworth grad Jacquie Joseph talks with a player at the plate.

Joseph is in her 20th season as head coach at MSU and has 565 career wins for the Spartans. Prior to coming to State, Jospeh spent five years at Bowling Green and earned 136 wins against 133 losses.

She took Bowling Green to the National College Athletic Association Regional in 1993 and followed that up by taking the Spartans to the NCAA Regional round in 1997, 1999, 2003 and 2004.

Joseph led Bowling Green to its first Mid-American Conference title in 1993 and was named MAC Coach of the Year. Prior to joining the Falcons, Jospeh spent one year at Indiana University and two years at her alma mater, Central Michigan University. In her two years at Central, she helped guide the Chippewas to backto back MAC titles.

In 2002, Joseph was inducted into the Carman-Ainsworth High School Hall of Fame as a member of the 1980 state championship team and was inducted as an individual in 2005.

After graduating from Carman- Ainsworth, Joseph went on to Central Michigan where she led the Chips to three MAC titles and three National Tournament appearances. She was a two-time First team All-MAC selection.

Joseph served a four-year term as a member of the NCAA softball committee in 2002 and she served as president of the National Fastpitch Coaches Association for four years, ending in 1998.

The Spartans struggled to an 11-42 finish last season including 0-27 in the Big Ten, but have started this season 13-7 overall.