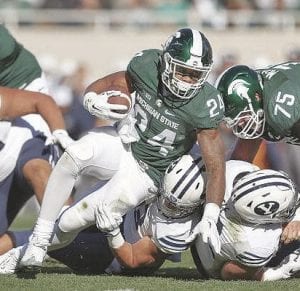 Gerald Holmes in action for the Spartans against BYU.

EAST LANSING – A 49-0 win over Rutgers on Saturday provided one scary moment for Carman-Ainsworth grad and Michigan State University junior Gerald Holmes. Holmes suffered a leg injury when he had his left leg awkwardly twisted under the pile of Rutgers defensemen on Saturday. The extent of the injury is not reported, per MSU policy.

Holmes has 83 attempts for 416 yards and five touchdowns this season adding to his career total of 208 attempts for 1,000 yards and 13 scores for MSU.

He has played a pivotal role alongside LJ Scott. Holmes was listed as the top running back at the beginning of the season and splits time with Scott in the lead role.

On Nov. 5 Holmes led MSU for the fourth time this season against Illinois with 78 yards on 12 carries, an average of 6.5 yards per carry. He scored on a 64-yard run with 58 seconds left in the second quarter to tie the game at 17-17.