Carman-Ainsworth has a new superintendent 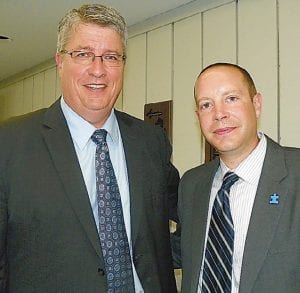 FLINT TWP. — In a surprise announcement Tuesday, the Carman- Ainsworth school board accepted the resignation of Superintendent William Haley and named his successor.

Haley, who has been with the district for nearly 11 years and its leader for six, submitted a letter of resignation that was accepted by the board with regret.

Patrice Hatcher, board president, stressed that it was not the board calling for Haley’s resignation.

“This has nothing to do with where we’re at (financially),’’ she said.

Immediately afterward, the board approved a recommendation from its succession subcommittee to promote assistant superintendent Steve Tunnicliff.

Tunnicliff, has been with the district eight years, starting as high school principal. His father William H. Tunnicliff is a retired superintendent of the Flushing School District and his mother also was an educator.

Tunnicliff, 37, said he aspired to become a superintendent some day but did not expect it to happen so soon.

He said it meant lot for the board to place its trust in him at such a challenging financial time.

“I take my responsibilities very seriously,’’ Tunnicliff said. “I will do my best to follow in Mr. Haley’s footsteps. I am tremendously proud to be a part of this district and the new superintendent.”

His wife Melissa and their children, Braeden, 9, Drew, 7 and Ally 4, were at the meeting to support him.

Tunnicliff said being named superintendent was also a proud moment for him because of Braeden.

Moving Braeden, who is autistic, to Randels Elementary school three years ago was one of the best decisions they ever made, he said. With support from staff, their son is now flourishing.

Haley supported Tunnicliff’s succession 100 percent and praised the board for not “monkeying around” with a decision.

“There are a lot of moving parts going on,”Haley said of the budget picture.. “It is important to have continuity and you couldnothavepickedaabetterperson.

“You’d have to look far and wide to find someone brighter, more caring and thoughtful or a better problem solver. He is a superintendent you can be proud of.”

Haley’s last day is June 30. He has accepted a new job as the first executive director of Genesee County Catholic Schools. It is a new organization formed by Catholic pastors to improve collaboration among area Catholic Schools.

“There are very few career opportunities that would draw me away from Carman-Ainsworth,” Haley said in his resignation letter.

He also stressed that he was not bailing out of the C-A district because of its looming budget challenges but to accept a job that has been under discussion about two years and will combine his commitment to faith and family and return him full circle starting out as a teacher at St. Robert in Flushing in 1974.

Prior to naming its new superintendent, the board held a public hearing for the proposed 2012-13 budget in which expenses exceed revenues and will require what Haley called “some gut wrenching” decisions.

One solution being considered is privatizing bus driver and custodial services, which also was looked at last year to meet state best practice mandates but not implemented.

Several bus drivers attended the meeting and spoke during public comment to plead for their jobs.