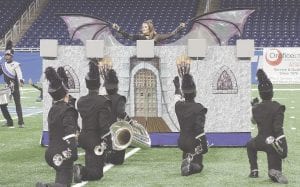 While the marching band ended the competition in 9th place, the performance garnered loud applause from the audience and praise from the judges.

“The Blue Brigade members should be proud of what they accomplished this year,” said Benjy Jones, Blue Brigade band director. “This group displayed the passion and dedication needed to perform at this level of competition.”

During the Championship, the 70-member Blue Brigade performed “DRAGONS”, an 8-minute music composition by composer, Rob Stein. As opposed to a standstill performance, where musicians stay in one spot, marching bands combine visuals and choreographed moves to bring the music to life.

“It’s an extreme version of multi-tasking,” Jones said. “Imagine learning an 8-minute composition and then memorizing complex steps that require you to create various formations without running into each other on the football field. That requires great discipline.” 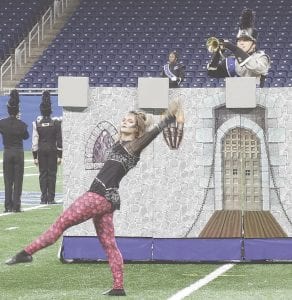 The end of marching band season does not mean the end of music competitions for most of the Blue Brigade members. Jones and fellow Carman-Ainsworth Instrumental Music directors, Amy Tennis and Milissa Kenworthy, teach music classes and will help prepare the students for upcoming Solo and Ensemble, Band and Orchestra Festival, and Concert performances, as well as various community events.

For instance, band members are scheduled to perform throughout the day at Barnes & Noble, 4370 Miller Road, on Friday, Nov. 29. In addition to playing holiday music, a percentage of book store sales that day will go to the Cavalier Band Boosters, which helps pay for music, equipment and uniforms.

Jones will also turn his attention to the 2020-21 marching band season and start developing a theme for the Blue Brigade’s next run to the State Championship.