By Tom Wickham
Special to the Flint Township View 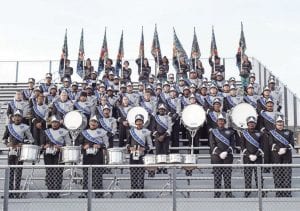 “Returning to the Championship is a testament of the hard work and dedication these young students have put into improving their performance since this summer,” said Benjy Jones, Blue Brigade band director.

The 70-member Blue Brigade ended the 2019 competition season Saturday with the performance of “DRAGONS”, an 8-minute music composition by composer, Rob Stein, at the Huron Valley Invitational at Lakeland High School.

Typically, marching bands perform outside on football fields. However, heavy rains forced Saturday’s competition inside. Still, the Blue Brigade gave a rousing performance of “DRAGONS” and the judges awarded the band with the Ruth Hughes Memorial Trophy for Esprit de Corps. The band previously received the award in 2008 and 2010.

“This is a special honor, as Esprit de Corps represents the spirit and camaraderie that has developed amongst the Blue Brigade members,” Jones said.

High school marching bands typically perform at football games and special events. Bands that choose to participate in the MCBA compete in weekly events throughout September and October where judges rate the performances on music, visuals and general effect.

The Blue Brigade will be one of 10 bands from across the state competing in Flight 2. The MCBA has schools divided among five flights based on school enrollment.

Tickets for the Championship are $20 for adults, $15 for students and seniors, and free for children under 5 years of age. Tickets are available the day of the event at Ford Field and purchasers must use cash only.