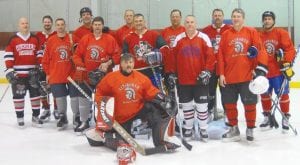 Jon Jepson, Flushing/Carman- Ainsworth varsity high school coach and General Manager at Iceland Arenas said the first-time tournament went very well and everyone had a great time. So great, in fact, that the tournament will now become an annual one.

“Flushing took on Carman- Ainsworth in the finals and Ainsworth won the trophy,” Jepson said. “CMHA set up a beer and food tent to help us all support youth hockey in the area. It was just a lot of 30-and-over alumni, and guys who hadn’t been on the ice in years, who came back home just to play hockey with former teammates. This will definitely become an annual event.”

Brad Kippe was in goal for the winning Ainsworth team.

“It was a lot of fun and the first tournament that I’ve ever played in, let alone won, with my brothers, Rod and Jeff,” Kippe said. “We had a lot of fun playing with and against friends and former teammates, some from a few years ago and some from over 30 years ago.”

Kippe noted that the Ainsworth alumni squad played a “Red and Gray” alumni game last year to support the Brad Stone Foundation in honor of Brad Stone and his Uncle Rob Stone who passed away in 2006.

“That game was attended by hundreds of Ainsworth alumni, who watched the ‘80s Spartans take on the ‘70s Spartans, who had a few younger Stone boys on their team,” Kippe said. “A rematch is scheduled for August 5 at Iceland Arena.”

“Everyone had a great time and we’re already planning to play again next year,” Kippe said. “I expect this tournament to really grow once word gets out how much fun it was.”