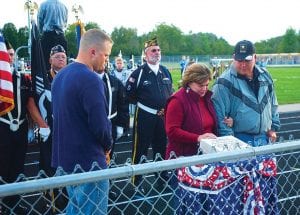 Teri and Dennis Johnson, parents of fallen solider and Carman-Ainsworth student Joe Johnson, stand near a brick memorializing their son during a special tribute at the Sept. 10 Carman-Ainsworth home football game. Johnson, 24, was killed in combat in Afghanistan on June 16.

FLINT TWP.
— In a moving ceremony, Carman-Ainsworth Community Schools paid tribute to alum Joe Johnson at its Sept. 10 football game. Johnson, a U.S. Army Specialist who graduated from Carman-Ainsworth High School in 2004, was killed in combat in Afghanistan on June 16 at the age of 24.

To memorialize their fallen soldier, the district held the special recognition ceremony, which was attended by Johnson’s parents, Teri and Dennis Johnson. A brick, bearing his name and calling him “A Real American Hero,” was placed in Alumni Plaza prior to the singing of the National Anthem and The Blue Brigade Marching Band dedicated its show to the memory of their former member.

The brick, which was placed in Alumni Plaza, calls Johnson “A Real American Hero.”

“C-A staff members remember Joe for his spirit and enthusiasm. He was a proud member of the Carman-Ainsworth Blue Brigade Marching Band, remembered for his positive energy and for the genuine way he engaged those around him,” Haley wrote. “Understanding that Joseph enlisted in the U.S. Army to serve, and subsequently has made the ultimate sacrifice in the service of his country, it is nonetheless exasperating to think that the world’s leaders cannot find alternatives to combat as they seek ways to stand on their principles while resolving their differences. Joseph, like all victims of war, was in fact a beloved son, grandson, brother and important member of this community. May his loss remind us all to respect and appreciate the gift of life, and to re-double our personal efforts to make peace; within our hearts and within our homes and neighborhoods. Our thoughts and prayers are will the Johnson family during this time of profound loss.”