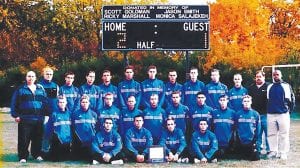 The 2000 Cavaliers soccer team is one of two being inducted into the Carman-Ainsworth Sports Hall of Fame.

FLINT TWP. — The 2000 Carman- Ainsworth boys’ soccer team and the 1976 Carman baseball team are being inducted into Carman-Ainsworth’s sports hall of fame. Inductees include: