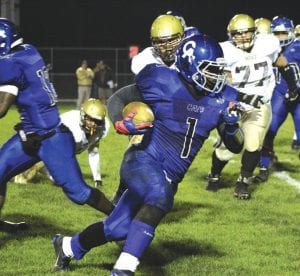 FLINT TWP. — Carman-Ainsworth jumped on its first-round playoff opponent the same way it has most of its foes this football season.

The Cavaliers put four touchdowns on the board in the first half and coasted to a 47-7 rout of Holt in a Div. 1 opener last Friday at Carman-Ainsworth Junior High.

Jevonte Alexander passed for three touchdowns and ran for another, as Carman-Ainsworth, 9-1, advanced to a second-round game Friday at home against Brighton. Holt bowed out at 5-5.

Of their 379 points this season, the Cavs have scored 255 in the first half. Their average winning margin is 38-7.

Alexander, who took over at quarterback in mid-season, got Friday’s game started with a 56-yard touchdown pass to Brandon Walker, then ran 62 yards for another score to give Carman- Ainsworth a 13-0 first-quarter lead.

Alexander threw two more touchdown passes in the second quarter, 23 yards to Walker and eight yards to Demarion Allen, for a 27-7 halftime lead.

Malik Seales took over in the third quarter, scoring touchdowns on runs of 10 and 26 yards for a 40-7 command heading into the fourth period. Tyquise Jackson completed the rout with a 17- yard touchdown run.

Seales led a balanced rushing attack with 98 yards on 16 carries. Alexander finished with 89 yards on eight attempts, and Lorenzo Redmond ran six times for 51 yards. Alexander hit 4-of-8 passes for 105 yards, with Walker catching two for 79 yards and Connor Storms hauling in one for 18 yards. The Cavs outgained Holt, 386-198.

Brighton, 6-4, got into the second round by beating Grand Blanc, 14-7. Carman-Ainsworth topped Grand Blanc, 13-0, in the season opener.

The winner will face the winner between third-ranked Rockford, 9-1, and Hudsonville, 7-3, next week.