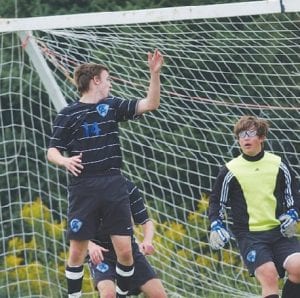 Alex Sarver heads the ball away from the goal in a game earlier this season.

FLINT TWP.
— Carman-Ainsworth soccer coach Jay Witham knew going into the Cavaliers’ game with Big Nine foe Davison last Wednesday that his team was going to be in for a challenge. He was right as the teams battled to a 1-1 draw.

Davison scored 16 minutes into the first half as the Cavaliers’ defense made a poor clearing attempt and Elliot Knoieczka took advantage to put the Cardinals up, 1-0. Davison would hold that lead until the final minute of the game, when Yaakoub Aziz scored off an assist from Todd Borkowski with 45 seconds remaining in the game.

“I thought the first 20 minutes were very even,” said Witham. “From then on I felt Carman-Ainsworth controlled most of the possession but we could not finish. That has been a problem the last five games. We were lucky to get the last second goal.”

The Cavaliers fell, 5-0, to a very talented Goodrich squad on Monday, Sept. 20. Patrick Season had a hat trick for the Martians, while Danny Garr and Alex Karas added single goals.

“The score does not indicate how we played,” said Witham. “Our kids played okay. Our keeper was under the weather, but that is to take nothing away from Goodrich, they are a very talented team and they came to play.”