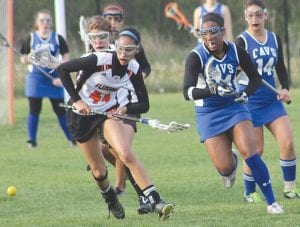 FLINT TWP. — While the Carman-Ainsworth varsity girls’ lacrosse team may have the good fortune of hosting its first matchup in the Michigan High School Athletic Association’s season-ending championship tournament on Tuesday against Wiliamston-Haslett at 5:30 p.m., not a whole lot else has gone right for this team in 2012. This includes former head coach Tim Bausack stepping down and handing over the program to first-year coach Kara Kelly, who, in turn, has had a wealth of issues to deal with this year that range from numerous cancelations and scheduling conflicts to the growing pains of trying to learn a new position without the luxury of a whole lot of time to do so.

Currently Carman-Ainsworth is the 64th ranked team in the state for Div. 2 in a 69-team field while Williamston-Haslett is listed in the 27th spot with a record of 9-8-1. Highlights this year for Williamston-Haslett include beating Swartz Creek, 21-4, on April 10 and White Lake Lakeland, 17-15, on April 13, less than a week later the squad got the better of Waverly-LC-GL United, 14-10, and earlier this month Williamston-Haslett went on a three-game win streak by getting over on DeWitt, 15-10, on May 1, Skyline, 10-9, on May 4 and East Lansing, 11-9, on May 7.

As for the Lady Cavs, this season has been more about getting a feel for the game and implement- ing a new system, lessons learned during losses to team such as Saginaw Heritage, 12-10, on March 29 and Oxford, 12-11, on April 11.

Last season, Carman-Ainsworth drew Powers in the first round of Swartz Creek regional No. 8-2 and was eliminated, 18-2, while Williamston started out with a 13-9 win against Swartz Creek that the team followed by losing to Powers, 9-6. Powers then claimed the 2011 regional championship with an 11-10 overtime win over Okemos.

Despite Carman-Ainsworth being such an unknown comodity, it still has several athletes that have been able to shine this year. This includes Alexus Colby, who had a hat trick for the Lady Cavs in a 12-8 loss to Midland, and Allia Howard and Faith Woodruff both scored twice that game. Shakira Wilson has also proven herself dangerous for Carman-Ainsworth by connecting for a goal during a 16-5 loss to Flushing and the one player who has the potential to shut down the opposing offense is senior goaltender June Hall.

The squad that comes out on top in this one will move on to play the winner of the Powers/Flushing game on May 30 at 5 p.m.