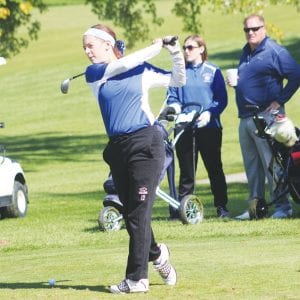 LAPEER – Unlike the No. 2-ranked Davison girls’ golf team that set goals to win their league, regional and state titles, Carman-Ainsworth continues building its program. Yesterday’s regional was to serve as a “what you be” moment for coach Bob Blaylock.

At the beginning of the season, Blaylock had labeled his young squad as more good all-around athletes and recreational golfers.

In contrast, his girls will goe toe to toe with Davison, which enters the regional ranked No. 2 in Div. 1 behind No. 1-ranked Lake Orion, No. 5 Rochester and No. 9 Rochester Hills Stoney Creek. On top of that, Lapeer, a team which beat Davison and Midland Dow just a few short weeks ago, is hosting.

The regional had what promised to be what Davison coach Darci Stocker called a dog fight for the title and or one of the top three finishes that will qualify a team to the state meet. The top three individuals not on those teams, also advance to the state finals Oct. 17-18.

Lapeer is being called a sleeper by some, but Stocker notes them as a real threat as they beat Davison in a Saginaw Valley League jamboree and scored within 10 strokes of Lake Orion in a dual meet.

That’s not saying that the Carman-Ainsworth top golfers, Mikaila Garrison and Alanna Gleason aren’t looking for two of the top three spots not on a qualifying team. Shooting for personal bests are Madysen League and Madison Cox. Carman-Ainsworth has no doubts that its team won’t qualify as a whole. The day was to be more an individual effort and playing to one’s potential as far as Blaylock saw things. And, the competition is gunning. He just hopes his girls aren’t caught in the crossfire.

“After losing the league title to Midland last Wednesday, Stocker said the Davison girls are “rather motivated”.

“The loss wasn’t what they were working toward so the kids still want to win the regional after that set back,” Stocker said. “Our three goals were to win league, regional, state. If you look at this regional, four state-ranked teams including us are competing. We have to get through this goal in order to reach the next one. I want the girls to go out and do the best they can with what they have. If they all shoot their averages we will have a darned good score. We’ll have to see who shows up and what each team shows up with to see where we stand at the end of the day.”

Stocker said her girls have also set one more goal for themselves just to make things more interesting.

“My girls have big goals to get a career mark on Wednesday, they are just very focused. There were a lot of teams at Lapeer on Sunday practicing and we were one of them. It’s going to be exciting and I think it’s going to be a dog fight!”

Davison has the chops to pull out the win. Kamryn and Karsen Johnston along with Shelbe Cahill and Gabby Stephens are the solid foursome that reeled off a string of tournament and invitational wins to begin the season. They earned their No. 2 ranking and respect from a lot of teams they faced.”

Lapeer also has the top teams in its sights—and a target on its back. Bring it on, says Lapeer’s coach.

“I believe this has to be the toughest regional in the state,” said Lapeer coach Steve Carlson. “We have a good team and we beat some good teams. We know we have to post a good number and we know we will have to shoot some personal bests.”

The Lighting are led by seniors Abby Kanasty and Caycee Turczyn, both of whom have state tournament experience. Baylee Thompson, freshman Brooke Gibbons and junior Morgan Stevens fill out the rest of the regional lineup.

“All five are playing good right now, so we are excited and ready to play,” said Carlson.

The Div. 1 state finals will be held at Bedford Valley Country Club.