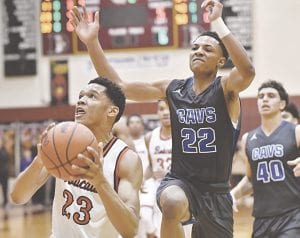 DAVISON — The Carman- Ainsworth boys’ basketball season was cut unexpectedly short, as the Cavaliers lost to Grand Blanc 40-39 in the first round of district play Monday night at Davison.

The Cavs jumped to a 12-4 lead in the first quarter, but Grand Blanc rattled off a 20-0 that bled into the second frame. The Bobcats shut Carman-Ainsworth down defensively in the second quarter, allowing only three points, as Grand Blanc took a 24-15 lead into halftime.

However, Carman-Ainsworth refused to go away quietly, battling back to make it a 30-26 ballgame by the end of the third quarter. The Cavs outscored the Bobcats 13-10 in the final frame but weren’t able to get over the hump. The Cavaliers tied the game at 39-39 on a triple from Jayden Nunn with 42 seconds remaining. Grand Blanc then took a one-point lead when Kevin- David Rice knocked down a free throw with 11 seconds on the clock. Carman- Ainsworth’s Dustin Fletcher missed an open lay up at the buzzer, allowing Grand Blanc to take the win.

Grand Blanc advanced to the district semifinals, where it played Davison after press deadlines Wednesday. On the other side of the bracket, Lapeer battled Flint Kearsley. The two remaining teams will square off in the district championship tomorrow at Davison High School at 7 p.m.

Carman-Ainsworth finishes its season with a 17-3 overall record. Grand Blanc was the lone team to beat the Cavs twice this season. The only other team to best Carman-Ainsworth was powerhouse Flint Beecher, one of the favorites to win the Div. 3 state championship.