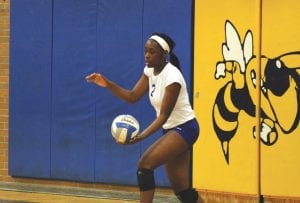 The Cavaliers started out the first set by taking a quick 7-3 lead. But a few breakdowns in communication and some better play from the Panthers turned the tide of the opening set.

The second set began much like the first. Carman-Ainsworth jumped out to a 6-1 lead, but couldn’t hold on to the advantage. The Cavaliers led the third set late, but couldn’t extend the match despite being in front, 24-23.

“We had our spurts, but Lapeer West played very hard,” said Carman-Ainsworth coach Barb Hurand. “We were scrambling on defense pretty much the whole night.”

The Cavaliers advanced to the quarterfinals at the Cereal City Tournament Saturday. Carman-Ainsworth opened play with a 25-11, 25-17 victory over Climax Scotts.

The Cavaliers then dropped a 18-25, 15-25 decision to Lakeview before splitting a pair of sets with Waterford Our Lady of the Lakes. Carman- Ainsworth dropped the first set 20-25 but came back to take the second set 25-12.

The Cavaliers then lost to Waterford Our Lady of the Lakes 2-0 in the Silver Bracket quarterfinals. Carman-Ainsworth dropped the first set 12-25 and lost the second set 10- 25.

Kayla Tigner had 28 assists and seven kills for the Cavaliers. Smith chipped in 25 digs, 16 kills and had 22 service points with five aces, while Jessica McClung added 13 kills.

McClung chipped in 15 kills and 24 digs for the Cavaliers. Smith added three aces, 12 kills and 27 digs.

Deja Lester had a pair of aces and nine kills for Carman-Ainsworth. Kali Jackson had 21 digs, Alexus Colby added 16 and Hudson had six kills for the Cavaliers.

“We had a great day,” Hurand said of their match with Central. “That was probably our best day besides the New Lothrop tournament.”