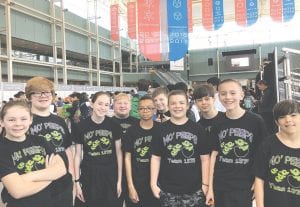 Ready to rumble. Here are 10 of the 13 members of the MO’ Peeps teams upon arrival at the Kentucky Exposition Center for the VEX World Championship.

Throughout the tournament, the Carman-Ainsworth teams were paired with alliance partners from the United States, Colombia, China, Singapore and Russia.

Team 8193D shared the middle school world championship with another team from China and one from Singapore. In VEX Robotics tournaments, teams compete in two-team alliances during qualifying rounds. During the elimination rounds, the alliances expand to three teams. For complete results: www.robotevents.com/ robot-competitions/vex-roboticscompetition/ RE-VRC-17-4885.html 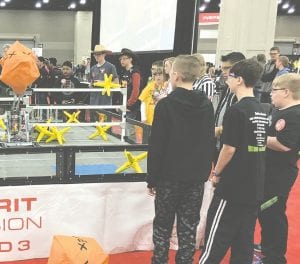 (right to left): Parker Oosterhof, 12, Alex Wickham, 13, and Adrien Fragoso, 12, talking strategy with their alliance partner from China prior to one of the qualifying matches.