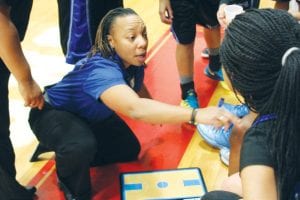 Johnese Vaughn has stepped down after six seasons.

Johnese Vaughn has stepped down and will be replaced by Lance Belill, a Carman-Ainsworth teacher who coached the Cavaliers’ boys’ junior varsity last year.

Vaughn coached the Lady Cavs for six years and last season led them to a 17-8 record and the first girls’ regional championship in the 28-year history of the school. They bowed out in the Class A quarterfinals to Canton.

Vaughn’s job situation was a factor in her leaving.

“She works in Ann Arbor and said she got a promotion,” said Carman-Ainsworth athletic director Bob Root. “She was having problems getting back and forth in the winter as it was. She just said it wasn’t going to work out with getting to where she needed to be.

“She did a good job. It was nice to win some tournament games that were meaningful. I think Lance will do a good job, too.”

Belill, 27, is a Birch Run High graduate who played basketball and football all four years there and also ran track and played baseball. He went on to graduate from Saginaw Valley State University and worked in Birch Run for a while.

He coached the Carman-Ainsworth boys’ JV to an 18-1 record last season and previously coached the middle school team.

Belill has eight years of coaching experience, but this will be his first as a varsity head coach.

“I’m very excited,” he said. “It’s a pretty good situation I’m stepping into. I’ve got some good players coming back. It’s a good feeling to take over your own program and do what you want to do with it from top to bottom.

“I’ve had a couple of girls in class, so we already have a good relationship coming in,” added Belill, who taught algebra and chemistry last year and will teach computers and geometry this year

The coaching position will also be his first with a girls’ team.

“It’s going to be a little different, but my coaching philosophy is not going to change,” he said. “My expectations are set pretty high.

“I feel a lot of it is team chemistry. If we can get on the same page and work hard together, we can do a lot, I don’t care if it’s boys or girls.”