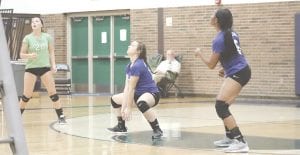 Carman-Ainsworth’s Sarah Roe positions herself under a ball during a match last season. Photo by Kylee Richardson