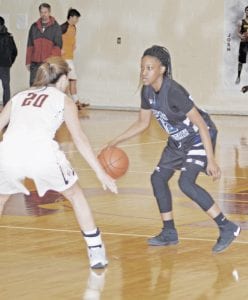 FLINT TWP. – Destiny Strother scored half of Carman-Ainsworth’s points in the Cavs’ 46-38 win over Goodrich at home Tuesday. Strother scored 22 points and has emerged as the Lady Cavs scoring leader this season. Jessiana Aaron added 11 points.

The game was off to a slow start with four points by each team in the first quarter. Both squads found their legs with Carman-Ainsworth outscoring Goodrich 18-14 in the second and 12-6 in the third. Goodrich tried to regroup in the fourth outscoring its hosts 14-12, but it was just too little, too late.

Carman-Ainsworth stood tall in the first half, but fell apart in the second under the stifling Heritage defense that limited Carman-Ainsworth to just eight points in the second. The game was knotted at 12-apiece after one quarter and the Cavs led 23-21 at the break. Heritage outscored the Cavs 13-4 and 25-4 in the final two quarters, however, to put the game completely out of reach.