Carman-Ainsworth offers a ‘Closer Look’ at the quality of education 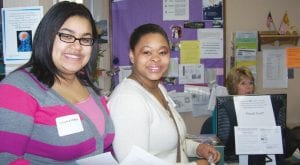 FLINT TWP. – Hello! Hell-oooo! Hellooooooo! The harmonizing voices of choir students greeting visitors to their classroom at Carman-Ainsworth High School was one of many examples of quality education displayed in a Closer Look tour last week of what the school has to offer.

The Closer Look initiative that began in late January invited the public into district schools to tour classrooms, learn about instructional offerings and ask questions. They were held previously at Dillon, Dye and Woodland elementary schools and at the Learning Community for the HeadStart program and concluded this week with tours of Rankin and Randels elementary schools.

The idea for Closer Look grew out of interest in improving awareness and perceptions about Carman-Ainsworth programs.

“We believe rather than leave what people think about Carman-Ainsworth to chance, we should get people in here (to) get an accurate perception of what Carman- Ainsworth is like,‘’ said Dave Swierpel, CA director of community education

The high school Closer Look began with an overview Rory Mattar, CAHS principal and Superintendent Bill Haley. About 25 people attending the program were divided into smaller groups for student-led building tours which concluded with a debriefing in the auditorium.

A cleaner, quieter and more technologically advanced environment were among impressions participants expressed after the tours. One woman said she was surprised by how quiet and well managed classrooms were. Having been told there were 17 substitute teachers in the building, she said she expected to see more classroom management problems.

In case you don’t know, the many colorful flags hanging from the ceiling in the foyer represent the diverse cultures of all students attending CAHS, according to Jessica Pettis and LaDiedre McKinney, students who co-led one tour group.

McKinney pointed out The Marketplace where business and accounting students get real-world experience by running the school store and the printing press where all school publications are printed.

Helpful librarians in the Media Center will not only help students locate a book but have brought in personal copies from home, Pettis said.

McKinney noted that computers in the Guidance and Career Center are available for student use during lunch hour.

“Kids who don’t have a computer at home can come in here and use these,’’ McKinney said.

Pastor Allen Overton, who said he was invited by the football coach to come to Closer Look, asked questions about afterschool accessibility.

“We have a lot of equipment here but not a lot of accessibility,” Overton said.. “I want to see our school open later in the evening.”

He has one son in the 12th grade and another in college who graduated from CAHS.

Flat-screen TVs in the cafeteria are used for school announcements and vending machines sell juice but not soda pop. Pettis and McKinney said.

In his presentation, Superintendent Haley gave an overview of the district’s vision and goals and noted several Points of Pride. One Point of Pride is that the district’s four-year graduation rate is 88 percent which is 12 percent above the state average, Haley said. Of those who don’t graduate, about 9 percent graduate within five years, he said.

The economy has made some impact. Because of changes in family circumstances, about 60 percent of students now qualify for meals, Haley said.

Haley noted that investment in an energy efficiency program will have saved the district about $1 million by the end of this school year. Those funds are directed to educational programs, he said.

Mattar said that major changes in recent years have not dimmed the quality of educational improvement at Carman Ainsworth.

“We are very proud of our high school and the things that go on in our building,’’ he said.

For example, overall enrollment has dropped to about 1,500 students, down from 1,800 a few years ago but the number of students enrolled in Advanced Placement Courses (college preparatory) has increased 125 percent in the past five years. There are currently about 175 students in AP courses, he said.