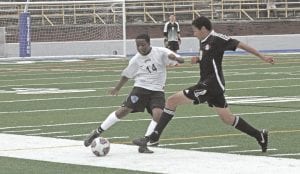 Carman-Ainsworth’s Wallace Hill rushes to get rid of the ball as a Corunna opponent gets near on Aug. 18.

Carman-Ainsworth will go head-to-head with host Lapeer, 8-2-3, on Tuesday at 6 p.m. at Lapeer to open up district play. The Cavaliers will be seeking redemption as Lapeer recently defeated Carman- Ainsworth 4-2 in league play on Oct. 4.

The final two teams will battle for the district title on Oct. 21 at 11 a.m. at Lapeer.