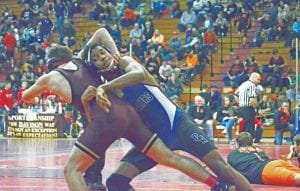 Carman-Ainsworth’s Kenyon Jackson tosses an opponent at 140 pounds at the Genesee County Meet at Davison on Saturday.

DAVISON — The Carman- Ainsworth wrestling team was in action Saturday at the Genesee County Tournament, with multiple wrestlers placing throughout the day. Clifford Boxley took home sixth place in the 119 division, Damion Wilkes won fourth in the 130 division, Kenyon Jackson took home seventh at 140, Matt Durbin was fifth at 189 and Grayden Hamilton was second at 275 lbs.

At 112, Carman-Ainsworth’s Brijesh Kumar lost to Davison’s Jaron Wilson in the first round by fall at 1:05. His next match came in the consolation bracket, where he would lose to LakeVille’s Jewell Colley by fall at the 1:59 mark.

At 119, Clifford Boxley defeated Zach Matsumiya from Chesaning by decision 7-1, but then lost his next match to Beecher’s Khalil Moten by fall at the 1:07 mark. Boxley would go on to win his first consolation match against Jake Shinaver from Lapeer but then fell to Swartz Creek’s Bradley Gilson in the fifth-place match to take home sixth overall.

Damion Wilkes won his first two matches at 103 against Greyson Robart of Davison and Jack Kalakay of Montrose, both by decision, 11-5 and 4-2 respectively. His run would end against Davison’s Marc Shaeffer, losing by fall at 1:29. In the third-place match, Wilkes fell to Brody Gulledge of Millton, leaving him with fourth place.

Chen Yang had two byes at 135 to take him against Seth Dominguez of Grand Blanc, where he would lose by fall at the 1:23 mark. In the consolation bracket, Yang would fall to Caleb White of Linden at 1:30.

Kenyon Jackson at 140 would lose his first match against Flint Powers’ Kyle Costello 4-2, but would go on to defeat Davison’s Logan Randolph by fall at 1:15 and Lapeer’s Kyle Dagleish by fall at 0:29 to take home seventh place.

At 145, Nathan Delong had two bye rounds before falling to Brian Case of Davison by a technical fall with a score of 17-2. Delong would drop his next match against Brandon Gilson of Swartz Creek by fall at 2:11.

Dominique Horton took a 7-6 decision at 160 over Davison’s Ashton Lange for her first match, but would lose to Connor Putman of Fenton in the next round by a 6-3 decision and also in the first consolation match against Millton’s Tyler Shelton by major decision 19-5.

Jordan Edwards defeated Devin Knudson of Clio at 171, by fall at 1:33. In the next match, he would lose to Trevor McGowen of Davison by fall at 0:38. In the consolation bracket, Edwards would win his first match against Durand’s Nicholas Moore by major decision 12-3, but would lose in the next round to Cody Franks from Clio by fall at 2:01.

Matthew Durbin’s run started with a win over Chesaning’s Cameron Casisto by fall at 2:26, but his championship rounds would end in the next round to David Foster from Fenton by fall at 2:46. In the consolation bracket, Durbin defeated John Marme from Linden with an 11-5 decision and also Grand Blanc’s Andrew Lapoint by fall at 1:31 to take home fifth place.

In the best finish for Carman- Ainsworth, Grayden Hamilton started his day off with a win over Colton Cunningham from Davison by fall at 0:58. In his next match, he defeated Clio’s Alex Yocom by an 8-1 decision. Continuing his winning streak, he went on to defeat Chesaning’s Wyatt Lanzynski by a 12-10 decision and Beecher’s William Jackson by fall at 1:59 in the semifinals. In the championship match, Hamilton would lose to Davison’s Arron Gilmore by fall at the 5:00 mark to finish second.