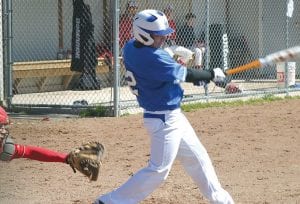 Alex Thompson (#2) swings for the fences earlier this season for the Cavaliers’ baseball team.

CLIO — With only five varsity baseball teams assigned to the Michigan High School Athletic Association’s district No. 3-1 at Clio on Tuesday, the Cavaliers had the good fortune to draw a round-one bye. Considering all that Carman-Ainsworth, 7-17 overall, 0-10 Big Nine, has been through this year, including the death of assistant wrestling coach Ron Weissend and this being the final season of Big Nine play before all four teams join the Saginaw Valley Athletic Association this fall, those extra days to prepare couldn’t have come at a better time.

“We have stuggled to put our best nine on the field because of injuries, discipline, or other reason. (This) season has been a roller coaster, always having someone miss a game because of different reasons,” said coach Tom Miller.

The two teams in this bracket that do have a round-one matchup are Clio, 4- 10 Flint Metro League, and Flint Northern, which square off on Tuesday at 4 p.m. The winner of that contest will then take on Carman-Ainsworth on June 2 at 10 a.m. On the other side of this equation, Swartz Creek, 6-8 Metro, and Big Nine rival Flushing also do not have round-one games. Instead, these squads will begin their postseason journey in a head-to-head matchup on June 2 at noon. Whichever two teams are left standing at that point will then meet for the district title later that same day.

“We have split with Clio, we have had four close games with Flushing and we have not played Swartz Creek, but we have lost and beaten teams we have in common,” said Miller. “I think the district can be won by any team, but would give Flushing the edge. Flushing has sophomore pitcher Kyle Randik. (They are the) top (team) in the area.”

One factor working in Carman- Ainsworth’s favor now that the playoffs are just over the horizon is all the talent it had return from a year ago. This experience should come in handy, as players such as Chris Moran, Colin Heaton, Jake Weissend, Jeff Wilhelm, Brett Dorch, Justin Hubbard, Jamaal Dixon, Grant Roe and Brandon Bobcean try and cope with all the extra pressures of the postseason.

“If we can stop beating ourself, we can beat anyone on any given day,” Miller said.

During the regular season the Cavaliers opened 2012 by beating Clio, 10-9, in game one of a non-league double feature before dropping the second, 8-1. On May 9, Carman-Ainsworth lost both halves of a conference twin bill to Flushing, 6-0, and, 5-2.