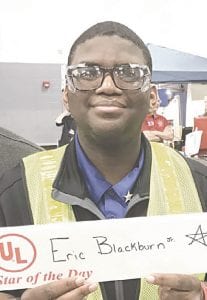 The team finished with an 8-4 record for 12th place out of 41 teams this past weekend at the competition hosted at Lincoln High School in Ypsilanti. Big MO was the first pick of the fourth alliance, but lost in the quarterfinals during a tie-breaker match.

“Everyone was disappointed to exit the tournament that early,” said Ellen Crain, head mentor of the Carman-Ainsworth Community Schools-based team. “Still, the team overcame some serious mechanical issues to finish well and gain some needed points to hopefully qualify for the state championship.”

Big MO is currently ranked 52 out of more than 500 FRC teams in the state. The state championship is April 10-13 at Saginaw Valley State University in Saginaw. www.thebluealliance.com/ event/2019micmp

The team was also recognized as a semi-finalist for the Safety Award sponsored by Underwriters Laboratories. This is the first time Big MO has been recognized for its safety efforts on the team and in the community.

“All in all, it was a good tournament,” Crain said. “The students have some ideas on how to improve the robot to compete at the next level of competition. The great thing about this program is it encourages youth to problem solve and be creative in technical and nontechnical areas.”