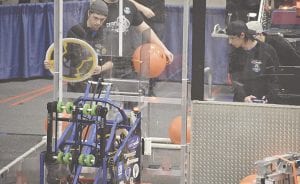 The robot is being positioned to retrieve a hatch that will be placed on a rocket or cargo ship. Two Big MO team members pictured are John Glaser, left, who is waiting to insert another hatch for pickup and Quentin Ortega, right, who is the robot driver. Photo by Tom Wickham

Big MO ranked 121 out of 549 teams in the state. Teams competing at the state championship are vying for spots in the FRC world championship

For the complete rankings and to learn more about the robotics com- petition, check out: frc-events. firstinspires.org/2019/district/FIM

The Carman-Ainsworth robotics team is also selling Detroit Tigers game raffle tickets. The Megatron Oracles (Big MO) Team 314 is selling opportunities to sit behind home plate as part of a fund-raiser for the team and the Mid-Michigan Robotics Alliance.

First prize is four tickets in the fifth row behind home plate plus parking for the Aug 10 game at 6:10 p.m. Second prize is three University of Michigan hockey tickets. Third prize is a Henry Ford Annual Membership Pass.