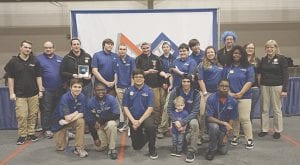 FLINT — Sandstorms, enemy robots and a ticking clock added to the tension and excitement at the FIRST in Michigan District Kettering University Event #2 this past weekend.

Maelstrom, the rugged and efficient robot designed, built and operated by members of the Megatron Oracles (Big MO) Team 314 from Carman- Ainsworth High School proved to be a formidable force on the competition field, installing hatches and loading cargo on rocket and cargo ships.

In fact, the robot so impressed judges and other teams that Big MO was awarded the Industrial Design Award, sponsored by General Motors. The award, according to FIRST, “Celebrates form and function in an efficiently designed machine that effectively addresses the game challenge.”

The award capped an exciting weekend for Big MO, which was one of 39 high school robotics teams from around the state. Big MO finished with a 10-2 record for 6th place at the end of the qualification round and was selected to join the 3rd-place team to form an alliance in the elimination round. 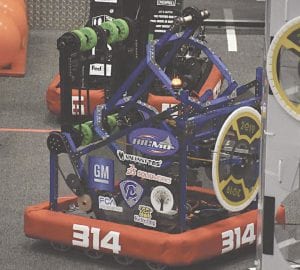 Maelstrom, the rugged and efficient robot designed, built and operated by members of the Big MO Team.

The student’s robot performed well in the elimination round, but it was not enough to stave off defeat in the semi-finals, said Ellen Crain, head mentor of the Carman-Ainsworth Community Schools-based team.

“The students did an amazing job operating their robot, but what is very impressive is how they worked with other teams throughout the matches,” said Crain. “FIRST is more than the robots. It teaches Cooperation and Gracious Professionalism, which will help these youth throughout their lives.”

In fact, while the students were building Maelstrom during the recent sixweek build season, they also split time working on non-technical areas, honing skills that are necessary in whatever career they pursue.

“A key focus area for our team is safety,” Crain noted. “This year, our students plan to distribute 500 safety kits to other FIRST teams, providing basic first aid tips, as well as a battery spill kit.”

Safety judges at the tournament noticed the effort and awarded the team’s safety captain, Eric Blackburn Jr., with a Safety Star award.

In addition to safety outreach, Big MO team members were busy sharing their stories and that of their team.

Students Michael Spreng and Ian Wickham, both nominated for Dean’s List, talked to judges about how FIRST impacts their lives. Students Kyra Davis, Jamie Arnold and Alex Wickham presented for the Chairman’s Award, which honors teams that best embody the purpose and goals of FIRST. While the team did not win any of these awards, the experience proved invaluable.

“I’m so proud of this team,” Crain said. “Each and every day, they learn and grow. Whether it’s designing a robot on the computer, teaching others how to be safe or developing their communication skills, these students are learning to approach life with humility.”

The team’s next competition is March 21-23 at Lincoln High School in Ypsilanti. Details: Visit www.thebluealliance.com/event/2019milin. — G.G.