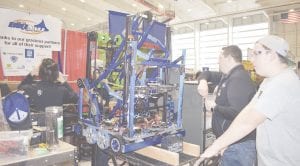 That sums of the scrappy, resilient run by the Megatron Oracles (Big MO) Team 314 during the

Big MO, which operates out of Carman-Ainsworth Community Schools, was the only Genesee County team in the finals, which saw two, three-team alliances square off in a best two out of three series to crown the Michigan champion.

The team’s bid for the title, though, came up short, with Big MO’s alliance losing by a narrow, eight-point margin. The loss came after an epic five matches that included two unprecedented ties. But the defeat did not dampen the team’s mood for long, as shortly after the event, they were informed that they qualified for the FIRST Championship that will be held in Detroit April 24-27.

“I am so proud of this team,” said team head mentor Ellen Crain. “I’ve always preached that the students strive to achieve excellence and this group did that despite facing some formidable odds during the tournament.”

The state championship did not start out as the team had hoped. Big MO lost its first two matches and spent the better part of the tournament hovering around the lower third of its 40-team division. Still, they were able to finish strong, ending qualification rounds with a 6-6 record.

During alliance selections, which involve the top eight teams each selecting two alliance partners, it went down to the final pick when Team 5460 from Lapeer Community High School and Team 3538 from Avondale High School selected Big MO to join the top alliance.

“It was an honor to be selected to compete with two of the best teams in the state,” Crain said. “They looked at our stats, saw how our students adapt to challenges and liked our robot’s capabilities.”

The trio of teams fought through several tough rounds to claim the 40-team Dow Division title. During the championship rounds, the alliance fended off former state and world champions to reach the finals. Of the six teams that competed in the finals, only Big MO had a championship banner, last winning the state crown in 2014.

In fact, Big MO has a lot in common with the Texas Tech Red Raiders, which lost a heartbreaker in the NCAA Division I men’s basketball championship. Like the Red Raiders, Big MO relied on defense to protect its alliance robots and stymie the opposition and proceed through the elimination rounds.

“Robotics is a lot like basketball,” Crain noted. “The students learn to scout, draw up game plans and make adjustments to whatever your opponent throws at you. The big difference is they design, build, program and operate a robot to do all the work on the field.”

The team is now preparing for the FIRST Championship, which will take place April 24-27 at Cobo Center in Detroit. They will be among 80 Michigan FIRST Robotics teams competing against a global field of more than 700 teams.

If you would like to donate to support the team’s trip to the world championship, contact Ellen Crain at 810-591- 7525, or email contactus@bigmo314.com.