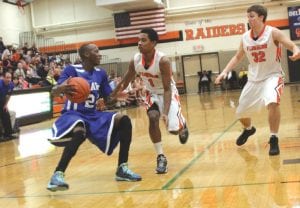 Carman-Ainsworth’s Cameron Morse had 15 points in the first and second quarters against Flushing last week.

FLUSHING — Cameron Morse scored 15 points in the first half last Friday to help put Carman-Ainsworth in position to take a 70-54 Saginaw Valley League-South win at Flushing.

The Cavs were able to claim an 18-15 lead at the end of the first quarter before outscoring the Raiders, 19-10 in the second, to head into the break up, 37-25. Morse’s three pointer in the opening session put Carman-Ainsworth ahead 12-10, which he followed with yet another make from behind the arc after several changes of possession to make it a 15-10 game.

Simeon Kemp’s second-period steal led to a basket and a 27-19 advantage that Morse turned into an 11-point lead shortly thereafter by connecting from three-point territory. The Raiders did battle back to make it a 32-24 contest after Chris Tripplett connected from eight feet out, only to see Morse hit another three-pointer to put Carman- Aisworth back up by 11. Ja’ Quin Jones then hit a pair of free throws for the Cavs to round out their first-half scoring.

After halftime, the Cavs weren’t quite as dominant, but still managed to outscore the Raiders, 33-29, in the second half, including 19-17 in the third and 14-12 in the fourth.

Morse came through to the tune of 23 points, Jones gave a 15-point performance and Brennan Gleason scored 12. Jaylen Bradley had 12, adding four points each were Demarion Allen and Kemp and posting two points apiece were Jarell Giles and Connor Storms.

The Cavs’ non-conference game at Clarkston on Monday was postponed because of weather and no new date has been set.

The Cavs, 8-5, slipped to 4-2 in the Saginaw Valley League-South and will visit Northwestern on Friday. — D.N.