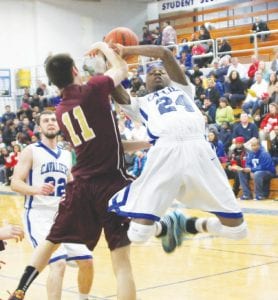 Carman-Ainsworth’s Ja’Quin Jones gets fouled by Davison’s Andrew Miller in the district opener on Monday at Carman- Ainsworth.

In an effort to get ready for the tournament, Carman-Ainsworth ended the regular season on Feb. 27 at home by downing Flint Metro League rival Brandon, 72-65. Morse scored 26, Green had 20 points and coming through with four points each were Ja’Quin Jones, Jaylen Bradley, Brandon Walker and Jarell Giles.

Carman-Ainsworth played yesterday in the district semifinals against Kearsley, which drew a bye for round one. On the other side of the brackets, Swartz Creek, 12-9, defeated Lapeer West, 15-6, on Monday, 56-38, and played Lapeer East, 3-17, yesterday. The finals then take place on Friday at 7 p.m.