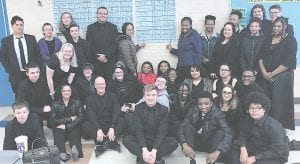 “We (Middle School Directors, Milissa Kenworthy and Amy Tennis, and I) are so proud of these students,” said Benjy Jones, Carman-Ainsworth High School Instrumental Music Director. “They put their heart and soul into the performances and impressed some highly reputable judges.”

While receiving a 1 denotes a superior performance, Jones said the Symphonic Orchestra qualified for state festival for the first time in school history.

A total of 23 ensembles performed at the district festival. Ensembles were rated on a scale from 1 to 5 with 1 being the highest rating possible. The overall score is computed using a formula which combines the ratings of each judge. Ensembles that earn an overall 1 rating or “Superior” are qualified for State Band & Orchestra Festival at the end of April.

Jones said the district festival was a success behind the scenes, as well. He thanked Carman- Ainsworth Community Schools leadership for hosting the event, the band and orchestra boosters for organizing and staffing the event, and various individuals and organizations that devoted time, money, food and equipment.

Hoffman’s Deco Deli & Café in Flint provided lunch for judges and directors, and Allied Rent-All in Burton and Carman Ainsworth Men @ W.O.R.K. donated equipment for the concessions. There were numerous volunteers and donations by individuals, including Waymond Beavers, Cathi Freeman, Clara Williams and Judy Forgette.