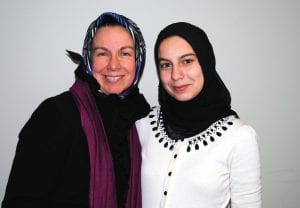 FLINT TWP. — Yale University is on the horizon for Mariam Salman, 17. The Carman-Ainsworth High School senior recently was accepted into the Ivy League school, and the Carman- Ainsworth Board of Education recognized Salman for her achievement at its Jan. 11 meeting.

Salman, who is a member of the Muslim Student Association (MSA), National Honor Society (NHS) and fouryear varsity tennis player, said she was excited about receiving the early action acceptance letter.

“I knew all about Yale. It’s been a dream of mine since I was a child,” she said. “I’m very happy to be accepted.”

Salman wants to go the premed route to study ophthalmology. She choose that field due to her own experiences with vision.

While she dreams of Yale, Salman said she also has applied to the University of Michigan and the University of Michigan-Flint where she has received full rides to both. While she is yet undecided on whether she will attend Yale, she has until May 1 to make her decision. A straight A student at Carman, Salman has taken Advanced Placement (AP) classes and scored a 34 on the ACT.

“It took a lot of hard work and determination,” she said. “When I was in the ninth grade, I got As but I didn’t really have a competitive drive. In tenth grade honors chemistry, Mrs. (Avideh) Lotfi really opened my eyes and drove me to be competitive with school.”

Along with her teacher, Salman said her parents, who are both professionals, stressed the importance of doing well in school to her and her three sisters, Mena, Sumaya and Zena.

“I’m very proud of all of my children,” said her mother, May Ghalib, MD. “When Mariam was four, you’d think she was 14. She’s goal-oriented and her brain is more advanced. She can convey things to be easily understood.”

Her mother also credits her faith for her daughter’s success and achievements.

“The greatest power is God,” Ghalib said. “Always realize that whatever is happening is for your goodness.”

Prior to entering Carman-Ainsworth High School in the ninth grade, Salman attended Genesee Academy. Along with her school activities, she is active in the youth group with her mosque, and volunteers locally with her youth group. “I’m hoping to do more,” she said. “It’s such a good feeling to help people.”

For those seeking out a path to their future, Salman has words of advice.

“Don’t give up on your dreams, and never listen to people who tell you that can’t. You can. It’s all inside you,” she said. “A lot of people helped me, but my parents have been my best support system. I also have great friends and peers who really challenge me academically. I also thank God. My faith and my belief in Him has helped me all the time and in times when it gets hard.”