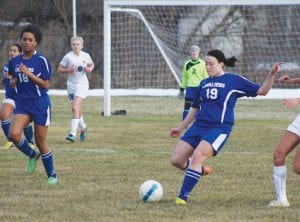 BURTON – What Mother Nature couldn’t take care of, the Kearsley soccer program did, complete with shovels.

After what Kearsley coach Marshall Paterson described as working all weekend to clear their field of snow, the Hornets were delighted to get their season under way on time against the visiting Carman-Ainsworth Cavaliers, winning, 5-1.

Paterson said the Hornets started in a positive fashion, but couldn’t turn their domination into goals until halfway through the first half when last year’s top scorer Kugar Nettell found the net on an assist from holding-mid Lauren Dellaposta. Dellaposta was involved in the second goal seven minutes later when she fed goalscorer Mallory Miller but she picked up a knock in the process and sat out the rest of the game.

Three minutes into the second half Kearsley thought it had sealed the game when Nettell scored again on an assist from Sydney Owens, but the Cavaliers grabbed one back just a minute later when Alexis Thurber’s shot deceived Hornets keeper Alyssa Hillis. Carman-Ainsworth tried to build on this and a series of fine free kicks from Jordan Marsh gave the home team some nervous moments. The Hornets weathered the storm and Nettell claimed her third goal when her attempt went in off a Cavalier defender. Senior Tori Porritt sealed it for Kearsley when she finished on an assist from freshman Lexi Kelly. “At first, I was just delighted to get the game underway, but then the girls impressed me with their work rate and their attempts to play the passing game we aspire to,” said Paterson. “Any time you score five goals you know that your strikers are going to get the attention, but I thought our back line were great and debutant Megan Livingston looked like she’s being playing on this team her whole life”.

The Hornets hoped to be back in action on Wednesday when Lakeville came to play, weather permitting.