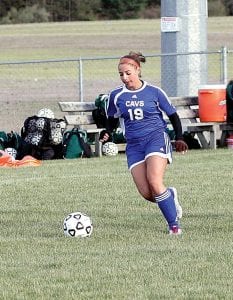 Carman-Ainsworth’s Maggie McCann dribbles up the field during a contest last week.

FLUSHING — The Carman- Ainsworth girls’ soccer team split with Flushing on Monday in the squad’s first Big Nine match of the season, 1-1. Shelby Marsh toed in the goal assisted by Jasmine Jones. Savanna Lacey had seven saves in net.

Last Thursday, the Cavs shut out Clio, 2-0. Marsh scored for Carman- Ainsworth in the first 45 seconds of the game assisted by Melody Branford. Twelve minutes into the second half, Jones burned the net assisted by Marsh. Lacey made six saves in the game.

“We played well tonight,” said coach Jessyca Matthews. “Both sides had lots of opportunities so we are happy to take the win.”

“I changed some positions and it was all for the good, so we’ll take the win,” Matthews added.