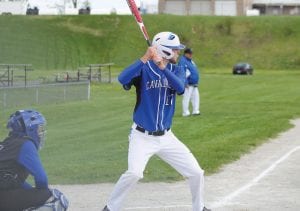 LAPEER — In a non-conference twinbill originally scheduled for April 1, the Cavs won 5-3 and lost 9-2 at Lapeer West on Saturday.

Game one featured Brennen Gleason earning the complete game win in addition to going 4-for-4 with a double and three RBI. Taking the decision in the nightcap was Austin Yost.

In another non-league doubleheader, Carman-Ainsworth split with Durand on April 17, losing game one, 10-9, prior to coming back to dominate the nightcap, 14-0.

In the opener Brennen Gleason had a homerun with three RBI, Jawanza Edwards went 2-for-3 with three RBI and a run and Chris Smith got pinned with the decision in relief of Noah Reed.

The second contest was highlighted by Austin Jerome holding the Railroaders to two hits and two walks with four strikeouts in four innings pitched.

The Cavaliers also played at Brandon on Tuesday, but those results were not available in time for our press deadline.

The Cavaliers, 1-2 overall, 0-0 Saginaw Valley League-South, are at Flushing for a pair of conference games today.