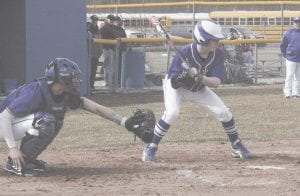 Carman-Ainsworth’s Cameron Koegel is one of seven key returners for the Cavaliers this season. Photo by Brandon Pope

After a tough season last year, Carman-Ainsworth baseball can only go up from here, as it embarks on its 2019 campaign. Jeff Haring, who is in his ninth year coaching, stated that the team will rely on its depth and pitching core for this year’s success.

Carman-Ainsworth graduated just three key players last year, which included Chase Matusik, CJ Hall and Christian Buchanan, and will be returning four seniors and three juniors that will all step up into leadership roles.

Senior Garret Gleason, Sean Jerome and Wallace Hill are in their third year on varsity and will be the core of the team, along with senior Harrison Hogan and juniors Logan Brassaw, Alex Green and Cameron Koegel.

“They bring unmeasurable leadership while expecting others to match their grit and determination,” Haring said. “This team has a balance of smart baseball intelligence and a skill set that enables us to stay competitive. Our goal is to compete for a district title and avenge a heartbreaking extra-inning loss to Flushing in last year’s district.” – K.R.

The Cavaliers begin their 2019 campaign with high hopes following the return of four of the five team members from last season’s team.

Senior John Karbowski will look to lead the Cavs this season as he has done for the past few years. Last season, Karbowski finished 38th at the Div. 1 regional and will look to improve upon that finish this year.

When asked to describe his team in a few words, Carman-Ainsworth coach Matt Young said they are inexperienced, but a lot of fun.

“Our reality is that we have guys that haven’t played a lot of golf over their lifetime,” said Young. “We are competing against teams that have much more experience in rounds of golf under their belts. But, we look to improve daily both individually and as a team. My guys have a great attitude about the game and we have a lot of fun together. We look forward to a fun season.” –A.V.

Also back are sophomores Christa Young in net and Taniya Boggan, the team’s second leading scorer. The team has also added Victoria Coleman- Ervine at midfielder, who coach Jessyca Mathews calls a ‘work horse’. Being one of the top to come off the bench will be freshman Lauren Fisher.

The Cavs also have a new league member with Grand Blanc. Both were previously league foes in the former Big Nine.

“We have always had a great relationship with Grand Blanc and welcome them into the league,” said Matthews. “The return of North and South divisions will help cut down on the distance of travel. Our division is difficult, but we look forward to growing and developing as a program in sportsmanship and in play.”

Playing in the SVL is no slouch on the soccer field, but the Cavs will look to counteract that.

“The challenge will be developing players to take over the roles of the seniors that will leave at the end of this season,” concluded Matthews. “The seniors of this program have been some of the most dedicated and hard-working players in my tenure. They have made a difference on and off the field, and finding girls to replace their energy and love that they display will be difficult for all of us.

“I expect for us to continue to work on building a program that is respected for hard work, determination, and sportsmanship. We have made goals for our team and we plan on working each day to obtain and celebrate our successes. I am lucky to have a program filled with individuals that are there because they love to learn the game of soccer and understand that our program is a family.” – B.P.

“Our season ended with less mistakes being made than we started with,” said Carman-Ainsworth coach Joy Roe. “The girls made improvements and started playing together as a team. We had a great group of girls that came out for tryouts this year. Last year we lost several key players, so this is a rebuilding year. We lost the following starters: pitcher, catcher, shortstop, left field, center field, right field and a few other intricate players.”

“Returning this year are: pitcher, catcher, first base, second base, and third base,” added Roe. “Two of them are seniors so we will be losing them this year. This year a freshman was chosen to be on varsity with the hopes that her talent will help fill the void of a couple we lost. Our biggest challenge is trust and communication. Since most of these players haven’t played together, it is going to be something we struggle with throughout the season. We feel some of the changes are good and some not good. It will be interesting to see how the season pans out.” – B.P.

The Lady Cavaliers find themselves in a new regional this season after being dropped to Div. 2 from Div. 1. A new league opponent will also be across the net as Grand Blanc joins the Saginaw Valley League after being voted out of the Kensington Lakes Activities Association last summer.

Bob Chunn, in his 16th season at the helm of the varsity boys and girls finds himself with a slew of new players.

“We didn’t do so well last season, finishing in the middle of the pack in the Valley and at our regional,” said Chunn. “We also had seven ties against opponents last season, something I’ve never seen us do as a program.”

Chunn said his singles lineup is solid, but most of the doubles players are firsttime players.

“We have a strong singles group that won most of their matches last year,” said Chunn. “I have a whole new group of beginners at doubles.”

Chunn said he has five returning players, two who played singles. Mary Dolinger played at No. 2 and Anya Harmon at No. 3. Huma Ahmad played doubles last year, but will move into a singles position this season. Deaslynn Haslett likely will also likely play at singles, moving up from doubles. Marcelia Ryan will also compete for a singles position. Chunn said that competitive matches will continue into this week.

“Everyone else is brand new,” stressed Chunn. “It’s going to be an interesting year for the team because it’s hard to compete with most of the players who have never played before. But they will go out and play and learn a new sport.”

Chunn said the new regional potentially has his squad playing at South Lyon. In past years, Carman-Ainsworth competed at the rugged Div. 1 regional at Saginaw Heritage. – L.P.

BOYS: Kenn Domerese knows a thing or two about high school track. Now in his 44th year coaching and with induction into four sports hall of fames, he knows how to get the best out of his athletes.

“Our goal every year is to finish in the top 10 in the state,” said Domerese. Carman-Ainsworth lost the Valley Championship for the first time last season and was runner up at the Div. 1 regional. The Cavaliers also placed seventh at the state meet.

“We should be in that top 10 in the state again this season,” said Domerese. “We’ve won four state championships and for years we win 95 percent of our invitationals.”

Domerese also noted that in his 44 seasons he’s seen 150 boys make allstate. That may have contributed to his most recent induction in the Greater Flint Sports Hall of Fame.

As for this season’s crop of Cavaliers, they just won the recent indoor invitational at Saginaw Valley State University.

“We have half a dozen kids that are really good,” said Domerese.

Among those are senior Trent Baron, who just signed with Eastern Michigan University. He’s the top Cavalier in the 400 and also runs the 200 and is part of the successful relay teams. Junior Jack Carter is one of the top 800 runners and Domerese started using him as part of the 4×400. He ran a 2-flat at the SVSU meet. Senior Jamarius Davis was ninth in the state in the long jump at the state meet last season. He also runs all the relays. Domerese said all of the relay teams should place at the state meet and last year the 4×400 tandem set a new school record with the fastest time at the Div. 1 state meet. Two of those runners are back this season.

Joe Chinkeefatt, a senior, is the key distance runner for the Cavaliers. He’ll be another one to watch this year. Another speed demon, sophomore Terrence Meux, ran the fastest sophomore time at the SVSU meet, a 21.7, which Domerese called “crazy fast”. Randall Broome is the Cavaliers “decathlete kid”. He runs the 100, 200, and relays.

New to the Saginaw Valley League this season is Grand Blanc, which was voted out of the Kensington Lakes Activities Association last summer.

“Grand Blanc will be a contender for sure,” said Domerese. “During our indoor season, we had five all-state performances. We combined with Grand Blanc in relays so that was good for us. Grand Blanc has been in the top five or six the past three or four years.”

Still, Domerese hangs his hat on having at least one Cavalier make the state meet 43 years running and no other school in the state has that distinction.

“I have a different mindset that our goals are to be all-state,” said Domerese. “Our biggest opponent is ourselves.”

GIRLS: Twynette Mixon brings high school and collegiate running experience to the girls’ program. She took over the girls’ team two years ago from 40-year coach Dave Thrash. And, with Grand Blanc entering the Saginaw Valley League this year, she’ll renew her ties to her old high school coach, Carlos Benton from her days at Flint Beecher. Mixon also ran track at Eastern Kentucky University before an injury ended her career. That’s how she came to end up at Carman-Ainsworth, coaching from 1991-1999, then returned in 2013.

Mixon continues to school up talented runners that include the 400 relay team of Aleah Mixon, Areyana Harrison, Kivonna Thompson and Destiny Morris, that qualified for states last year. Two of the girls, Harrison and Thompson are back this season as seniors. Mixon and Morris graduated.

Another standout, Rayven Brantley, is very close to breaking the school record in the 800. As a senior, that would certainly cap her high school career. Senior Ellen Fletcher will be looked at to do well in the field events and there are several more seniors that were promising last year back in the fold.

“Moving forward, this year, we have 20 new freshmen,” exclaimed Mixon. “Already out of them, I’m seeing some promising things. My roster has 59 girls on it right now.”

JaKarra Nelson, one of the incoming freshmen was selected to attend last week’s SVSU Invitational. Amaya Jenkins also got the nod. Mixon said she also has 11 sophomores and 15 seniors on the team.

“It’s a young team and moving forward, but it’s going to be a whole new generation of runners,” said Mixon. “The freshmen are eager and the seniors are looking to go out on a good note. I’m looking to get many runners, not just the relay team to the state meet.”

The addition of Grand Blanc to the league “steps up the competition a heap,” said Mixon. “They are a powerhouse. They have several extraordinary runners and their one girl, Hawkins is phenomenal. I tell the girls it’s what they put into their practices and how they prepare. Never count yourself out of anything. The girls are pretty excited, but nervous at the same time.”

“I’m just really looking forward to some really great things to come this season,” added Mixon. “Several basketball players are also out here improving and doing their part, so it will be exciting to see how they all progress.” – L.P.