It will be the arms of senior pitchers Brennen Gleason and Noah Reed that will drive the Cavs through the ups and downs of the 14-team Saginaw Valley League this season. Add to that rotation sophomore hurler Austin Jerome and a lineup that includes seven returning upperclassmen and Carman-Ainsworth’s prospects are getting brighter by the day.

“Our team focus will be conscious at-bats, team discipline at the plate and in the field,” said first-year coach Steve Faculak. “We hope to also use good at-bats (small ball) to take advantage of a strong pitching rotation.”

On a roster that features 10 seniors, there will also be two sophomores that look to make a name for themselves in the field, center fielder Jawanza Edwards and shortstop Cooper Betancourt.

“The strong teams are usually the same. I believe Flushing will be the team everyone will be gunning for in the South,” Faculak said. “Our belief will be contrary to this. We have seniors that feel it is our division to lose. If we can outwork our opponent and be competitive every pitch, we have a strong chance of making positive things happen this year.” — M.S. 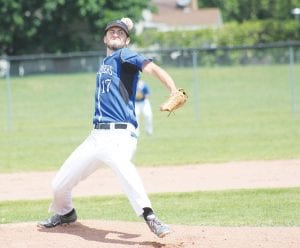 Among the newcomers, freshman Tyson Fields played well last summer and has looked good on the driving range.

“When the weather breaks, there are a couple of guys who will get a chance in tryouts,” said Blaylock. “I look for a lot of improvement as a team, and especially Haywood, who worked very hard last summer.”

The Cavaliers are scheduled to open their season Monday at Brandon. – D.N.

Last year’s campaign wasn’t quite what the Lady Cavaliers had hoped for. In fact, they ended the 2013 winless. The squad, however, is looking to turn the corner under first-year head coach Kim Borse.

Second-year varsity coach Joy Roe has 11 players returning this year, including two who are back after a season off. Five of the returners are seniors, including pitcher/first baseman Jessica McClung, outfielder Elizabeth Roe, catcher/center fielder Meghan Borgerding and outfielder Samantha Johnson. Center fielder/ shortstop Katelyn Koegel is back after a year’s hiatus.

“We have strong leadership from our seniors, which I believe will help pull us through the tough situations, and we have some developing talent that we are going to work on,” said Roe, who previously coached the junior varsity. “It is going to be another tough year for us because we are playing some very strong teams.”

Carman-Ainsworth will visit Saginaw Heritage on Monday and Bendle on Wednesday. — D.N.

The Cavaliers lost a total of five players to graduation, but do have a number of quality players returning. Leading the list of returnees is J’Lynn Corder, First Team All-League selection last season.

“The team is practicing hard and has a great work ethic,” coach Bob Chunn said. “Our goal is to win all our matches.” — K.W.

The Cavaliers boys have already had an impressive start to the 2014 season, with a 17-medal performance at the SVSU Invite. The 2013 Saginaw Valley League champions had one first, three second and one third place finish individually.

Logan Bannister finished right behind Allen in third place. The Cavaliers also posted impressive times in the 800 and 1600 meter relays.

It was a very good start to the season for Carman Ainsowrth. It was one coach Kenn Domerese hopes to build on as the season progresses.

“We hope to repeat as SVL champs and send as many guys as possible to the state finals for potential top-four finishes,” Domerese said.

The Cavalier girls return most of their roster after losing just a couple of runners and throwers to graduation. Carman- Ainsworth 400 and 800 relays teams qualified for the state meet last year.

A number of those runners are returning for the 2014 campaign. Rani and Randi Richardson, who were both members of last year’s 800 relay squad, are back.

Randi will also compete in the 200 and 400. Alyssa Garcia, who ran on both state relay teams last season, also returns.

Harmany Williams will run in most of the sprint events. Her specialty is the 100.

The Cavaliers should also be very strong in the field events. High jumper Quay Jones and pole vaulter Diamond Scales should rack up plenty of points for the Cavaliers this season.

Carman-Ainsworth also had a couple of talented freshmen on the squad. Laura Depew will compete in the 100, 200 and 400 while Derica Boose will join the 800 relay squad.

“The freshman class we have coming in has some good athletes,” coach Dave Thrash said. “This is a year of learning for them. They’re starting to learn this is pretty big-time stuff. They are starting to grasp that.” — K.W.

Jessyca Mathews enters her 15th season at the helm, six at the varsity level. After finishing 3-10-1 last season, there is nowhere to go but up. The squad will have to do that without Shelby Marsh, who is playing at Cleary University. She is the leading scorer in Cleary program’s history for women and men.

Alexis Thurber will be playing midfield most of the season, but will also see work on defense, noted Mathews. “She is the most dynamic player for the Cavaliers due to her abilities to play anywhere on the field,” Mathews added.

Jordan Marsh, returning player with First-Team honors for Saginaw Valley and District #15 had already signed a letter-of-intent to play her college soccer at Clearly University with her sister.

“Jordan has been the anchor of the Cavalier defense for the past two years,” Mathews said.

Arianna Vantine is the new keeper, a freshmen with “great hands and judgment in goal”.

Rachel Roop is the leader of the program, and is switching back to defender for her senior season.

“The Lady Cavs are taking on a new look this season with many new additions, but they have the will to work together as a team and to work to fulfill goals for the program,” Mathews said. “I can say that this is the most heart-driven team that I have coached in years. They want to work hard, they don’t complain, and I would rather have a team filled with new girls who work hard, care for one another, and are focused on the concept of TEAM, than to have a group filled with people who think that they are elite and above others on the team.” – L.P.