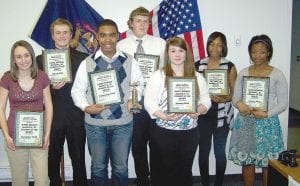 FLINT — A group of seven area high school students — including one from Carman-Ainsworth — were recognized April 29 for focusing on academic achievement and career goals.

The seven were honored by 68th District Court Judge Herman Marable Jr. as Students of the Month, a program through which Marable and the Citizens Advisory Committee (CAC) recognize area high school students.

Honored at the ceremony were those students named so far during the 2010-2011 school year. They include: Douglas Robinett of Carman- Ainsworth High School; Jessica Mullins and Kristen Loiselle of Swartz Creek High School; Milton Straham III of Genesee Early College; Jazelle Walker of Mott Middle College; Ty’Yonda Copeland of the International Academy of Flint; and Jimmy Ewald of Powers Catholic High School.

The students receive a $75 savings bond and they job shadow Marable for a day. They are also in the running to be named Student of the Year. 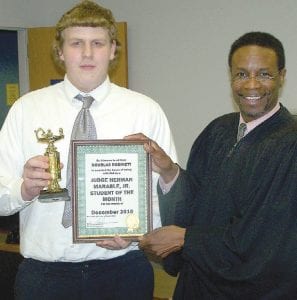 Douglas Robinett, a Carman-Ainsworth student, was one of the students recognized by Judge Herman Marable Jr.

The award is based on completion of an application and essay.

Marable said with this group the program, which has been in existence since 2004, has seen its 50th Student of the Month.

“It’s a delight to me to think I have a positive impact,” said Marable. “You all need to continue to do the things you’ve done that have gotten you to this point.”