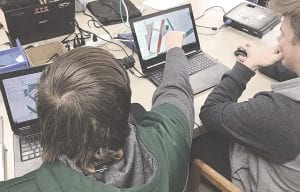 FLINT — After six tiring weeks of almost nonstop work, the student members of Megatron Oracles (Big MO) FIRST® Team 314 were able to step away from their robot and prepare for their first competition.

Stop Build Day, as it is called, culminates the intense six-week period in which FRC teams design, build and program robots to compete against each other this spring.

Big MO, which operates out of the Carman-Ainsworth Community Schools, has won numerous district, regional and state tournaments. Robots designed, built and programmed by the students have been honored with numerous engineering and design awards.

The build period was established by FIRST® as a system to show students how to improve their understanding of the fundamentals of project planning, according to Ellen Crain, head mentor of Big MO.

Students in the robotics program are mentored by professionals in the engineering and computer-science fields. Adhering to the principle that the students do the work, mentors focus a lot of their energy teaching the students the fundamentals in programming and computer aided design (CAD).

“I’ve been able to teach the design engineering build process, called the sticky note method by the students,” said Steven Wallace, a General Motors engineer and mentor for Big MO. “The six-week build season teaches time management and its importance in the workplace. It gets students used to deadlines in the workplace, just like homework at school.”

When the build period ends, the robot is “bagged and tagged”. Teams are only allowed to “unbag” their robot for six hours in between competitions to work on their robot.

With the official build period over, Big MO turns its attention to its first competition on March 8 at Kettering University. The competition theme is Destination: Deep Space, presented by The Boeing Company. www.firstinspires.org/robotics/frc/game-and-season.

“Despite all the challenges we have gone through, we have been able to figure out a way to continue to sustain and be competitive.” Crain said about the team, which is entering its 21st season. “These students have learned a lot in six weeks, and I have faith they will do their best in the upcoming competitions.”