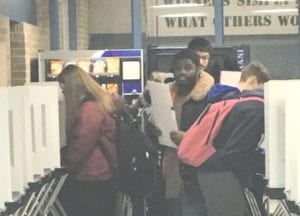 CAHS freshmen, sophomores and juniors voted in a mock election while seniors were trained to act as election clerks. Voting results are posted on the Genesee County elections website.

FLINT TWP. — Carman- Ainsworth High School experienced a mock election last week that was as close to the real thing as it gets.

Actual ballots were used to test brand-new voting equipment that not even their parents have used yet, said Township Clerk Kathy Funk, who helped plan the one-day educational activity in conjunction with the school and the county elections division.

The experience was authentic right down to voting results being transmitted electronically to the county clerk’s office downtown. Election results are posted on the county website at http:// www.gc4me.com/departments/county_ clerks1/election_ division.php

Senior students acted as poll workers while freshmen, sophomores and juniors voted on elective choices for next year and other career planning questions.

Results show that 385 students participated in voting. Most students (16.10 %) expressed interest in learning more about Meds followed by the Arts (11.43 %) and Business Management (10.91%). In all, students had 14 options to choose from but could only choose one. 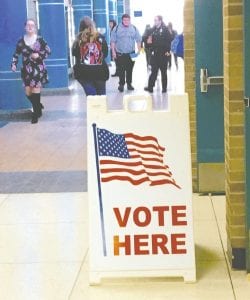 The simulation gave government officials an opportunity to test the county’s new voting equipment and also provided students with an educational experience.

In a fun atmosphere, they were given the opportunity to vote just as they would during a “real” election, said Funk. Students were shown exactly how votes are counted.

“It will also take some of the fear out of voting. … Now they will know what to expect the first time they are eligible to vote,” Funk said.

The event also provided an opportunity to register 94 future voters, she said.

County Clerk John Gleason, who attended the event, said the students were excited about participating in the voting process and he hoped to see more of them at the polls when they are old enough to vote. He said a similar mock election is being discussed for Gaines Elementary School in the Swartz Creek school district.

Tom Klee, a township trustee and CAHS teacher, said the CAHS mock election was part of a Career Fair where students learned more about career pathways such as Career Technical Education (CTE) – which was one of the ballot questions.

Klee said CTE offers many opportunities for young people to get certification in a trade without having to go to a four-year college. One former student attended the Hobart Institute of Welding Technology in Ohio and is now earning close to $100,000 a year., Klee said. He worked on projects in Detroit and also the new KWA water pipeline from Lake Huron to Genesee County.

“It is cool for kids to see what is out there other than a traditional four-year degree,” Klee said.