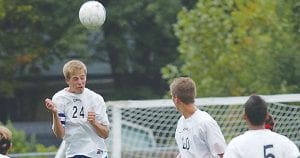 FLINT TOWNSHIP
— It was a tale of two halfs Tuesday night as the Cavaliers weathered the elements and the Hawks of Saginaw Heritage in the first half, but ran out of gas in the second, giving up four second-half goals to fall to the Hawks, 4-0. The Cavs and Hawks played to a scoreless first half as the strong winds made game play difficult, but in the second half Heritage’s Sean Wainwright finally found the back of the net off of an assist from Alex Maturen in the 34th minute. That score held until the final three minutes, as Heritage scored three goals in three minutes breaking open a close game into a blowout. The first goal was scored by Don Evans from Maurice Williams with 3:34 left, then Wainwright scored again unassisted 54 seconds later, and finally Evans got his second again assisted by Williams with 1:20 left.

“After playing a good first half with the wind in our face, it was disappointing to see my guys give up in the last four minutes of the game,” said Carman-Ainsworth coach Jay Witham.

The Cavaliers will not have much time to dwell on the loss, as they will travel to fellow Big Nine member Flushing Wednesday in a very difficult league match-up. That’s followed up by another tough home match with perennial power Saginaw Nouvel Catholic Central on Tuesday.