DAVISON — After placing fifth at the 23-team Genesee County Meet on Dec. 15, the Carman-Ainsworth varsity wrestling team returned to Davison last Wednesday to compete in a Saginaw Valley Legue-South quad meet that also featured Flint Southwestern and Flint Northwestern. Conference competition has been kind to the Cavaliers this season and the Cardinals’ gym has proven to be a good luck charm, as well, all of which was working in Carman- Ainsworth’s favor as the squad took victories over Southwestern and Northwestern after downing Davison on Dec. 12 at Flint Northern.

The Cavaliers had been scheduled to take the mat at the Montrose Invitational on Saturday, but that event was canceled when the schools in Genesee and Lapeer counties were closed early for Christmas Break because of numerous unfounded threats to schools and students.

Carman-Ainsworth starts the new year on Jan. 5 at the Rochester Adams Tournament. 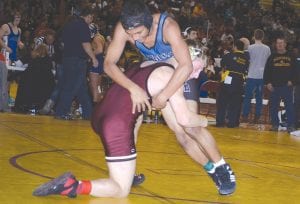 Carman-Ainsworth’s Shaquel Paulicek tries to escape the takedown of Davison’s Matthew Miller at the Genesee County varsity wrestling meet hosted by the Cardinals.