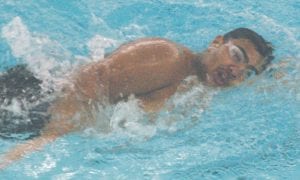 Carman-Ainsworth/Flushing’s Kiran Vekaria paces himself in a long relay against the Lapeer co-op squad.

FLINT TWP. — The holidays were kind to the Carman-Ainsworth/Flushing varsity boys’ swim team, allowing them a two-week break from the pool.

That well-deserved respite came to an end last Thursday, though, as the combined squad from Lapeer West and Lapeer East arrived in town for a non-conference contest that saw Cavaliers’ coach Kevin McGlashen’s team rise to the occasion on its way to a 98- 77 victory.

Setting an early example for Carman- Ainsworth by winning the 200 medley relay in 1:54.67 was Tyler Pangerl, Patrick Sharp, Mike Johns and Nick Price, coming in third for the event in 2:03.79 was Blake McDonald, Jordan Michael, Kent Crawley and Evan Snyder, and placing first, third and fourth in the 200 free with times of 2:06.37, 2:14.56 and 2:24.13 were Jake Ziaya, Casey McNally and Paul Lucky, respectively.

“Honestly, I have never seen a more outstanding display of sportsmanship from any team,” said Lapeer coach Pat Thomas. “Carman-Ainsworth has 40 kids and I have 14. When my relays were in the pool, their swimmers not in the pool came down to my lanes and the sides of the pool and were cheering my swimmers on. That’s class. I’m sure Kevin (McGlashen) didn’t ask them to do that, he just runs a quality program and the kids did it on their own.”

Carman-Ainsworth/Flushing hosts Davison today for a Big Nine matchup prior to competing at the Genesee County Meet at Fenton on Jan. 19-21.